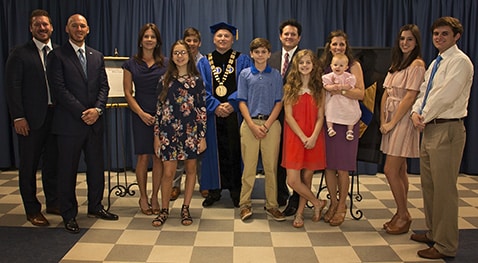 “This is the highest honor that the university can bestow upon an individual,” said Dr. Daryl Burckel, McNeese president. “Billy Navarre is deserving of this honor and for his considerable support of McNeese. Mr. Navarre greatly valued educational attainment and lifelong learning and he was an exceptionally generous individual who strived to improve our community.”

A native of Welsh, Navarre came from humble beginnings with a strong desire to succeed. He graduated from Welsh High School and attended McNeese State University, but he would leave to take a job in finance.

After several years, Mr. Navarre began his automotive career as a sales manager at a small dealership in Louisiana, and in 1982, he purchased a struggling Chevrolet dealership in Sulphur, where he started with only 12 employees. Within 18 months, his dealership was the No. 1 volume selling automobile dealer in all of Southwest Louisiana.

In 1989, he opened up his second Chevrolet dealership in Lake Charles, which would also be a top spot for automotive sales, and then over the next 30 years, Navarre would acquire the Hyundai, Honda, Cadillac and Equus franchises, build a new state-of-the-art dealership in Sulphur and add new quick lube and carwash facilities in Lake Charles and in Sulphur.

Upon Navarre’s death in 2016, Billy Navarre Chevrolet, Cadillac, Honda, Hyundai and Equus was the second largest locally owned business in Southwest Louisiana with more than 300 employees.

In addition to his success as a business owner, Navarre made serving his community one of his top priorities.

Navarre was an ardent supporter of McNeese athletics and the Cowgirl Kickers and is a member of the McNeese Athletics Hall of Honor. He was one of the founders of the Golden Saddle Club that supports the McNeese rodeo team.

He also established a McNeese academic endowed scholarship for first-generation students from Southwest Louisiana and was instrumental in establishing the McNeese Rotaract Club to develop young adults into community leaders through Rotary International. He also was a generous donor to Calcasieu public and private schools and SOWELA Technical Community College, where he served on its foundation board.

For more than 30 years, Mr. Navarre devoted his time to helping develop youth through sports, and he served as a volunteer baseball, basketball, football, soccer, and softball coach.

Navarre served as an outstanding leader in civic and professional organizations through his service on a multitude of boards and organizations. His leadership in the community also received recognition. He received the Citizen of the Year Award by both the West Calcasieu Chamber of Commerce and the Southwest Louisiana Chamber – Economic Development Alliance, Friend of Education Awards for Calcasieu Parish and for Louisiana, Louisiana Association of Educators Award, the National Association of Educators President’s Award, the Marine Corps’ Citizen of the Year; Ernst and Young Entrepreneur of the Year; Blue Cross/Blue Shield Angel Award, Literacy Hero Award; Rotary Distinguished Service Award; Jaycees Outstanding Young Businessman of the Year for Calcasieu Parish and for Louisiana, Delta Sigma Theta Outstanding Public Service Award; United Way Silver Award; Honda President’s Award; GM Mark of Excellence Award; Better Business Bureau Torch Award for Highest Standard of Ethics and the Family Foundation Outstanding Community Philanthropist.

He is survived by his widow, Carrie, and five sons – Ryan, Jareth, Barrett, Grant and Bryce – and daughter, Kaitlyn.