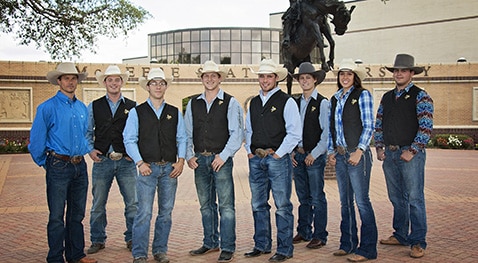 Contestants compete all year in one of the National Intercollegiate Rodeo Association’s 11 regions for a chance to rope or ride at the CNFR. McNeese competes in the southern region.

“This could be the strongest men’s team I’ve taken to nationals,” said Coach Browning. “And Mia is also a strong contender this year. I am so proud of these student-athletes.”

Last year, Frey won the CNFR men’s all-around championship. He and Manzanares are making their third appearances while Soileau is making his second appearance at nationals.

Nationally, Manzanares is ranked No. 1 in breakaway roping, No. 3 in women’s all-round standings and No. 7 in goat tying. In the southern region, she is No. 1 in all three of these categories.

Frey and Jongbloed are both ranked in the Top 25 in the men’s all-around national standings.

In tie down roping, Frey is currently ranked No. 18 nationally while in the southern region he is No. 2 and Jongbloed is No. 3.

In saddle bronc riding, Sanford ranks in the Top 25 nationally and No. 3 in the southern region.

McNeese intercollegiate rodeo began in 1947 and this is the 27th consecutive year that McNeese has sent students to the national championship finals.