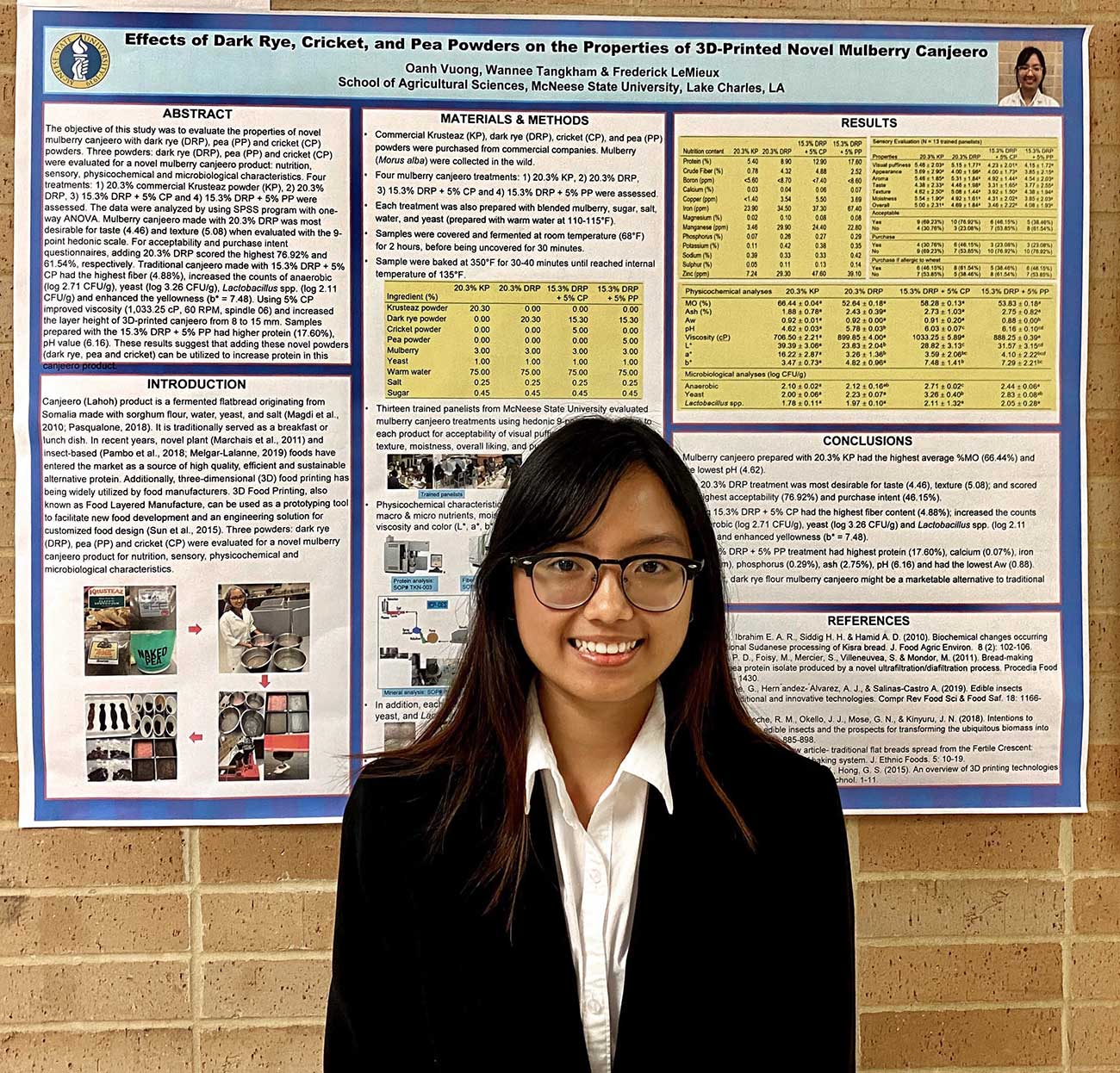 Her first poster, “Effects of Dark Rye, Cricket and Pea Powders on the Properties of 3D-Printed Novel Mulberry Canjeero,” reflected her research into whether or not substituting traditional ingredients with protein powders could make canjeero, a traditional Somalian flatbread, more protein rich and improve its taste and texture.

Customarily prepared with sorghum flour, Vuong substituted this ingredient with dark rye, cricket and pea powders, including combinations of the different powders, and then used a 3D printer to produce the flatbread. The resulting products each underwent a nutritional, physical, chemical and microbiological analysis. Then, 13 panelists from McNeese evaluated each product on nine qualities, including appearance, taste, texture, overall liking and purchase intent.

Among Vuong’s results, she found that canjeero prepared with 20% dark rye powder scored highest on taste, texture and purchase intent and had higher nutritional content than commercial flour. The highest nutritional content, however, came from canjeero prepared with 15% dark rye powder and 5% pea powder, which provided nearly four times the protein, calcium, iron and phosphorous content as traditional preparations. However, this mixture scored much lower on consumer tests.

“My conclusion,” she says, “shows that dark rye flour is likely both a healthier and marketable alternative to traditional preparations.”

Eight finishing pigs were selected in Vuong’s research and were sorted into two groups. A week before harvest, the control group received traditional corn and wheat, while the experimental group received 2% cricket powder, an alternative and sustainable source of protein and amino acids. The pigs were weighed to determine average daily gain and feed intake. After harvesting, conventional carcass measurements were taken and 14 panelists from McNeese were enlisted to evaluate the pork on appearance, color, flavor, tenderness, juiciness and overall liking. The pork’s physicochemical characteristics were also compared, including the micro and macro nutrients, firmness and bacteria growth.

Vuong’s results were presented at the (IFT) SHIFT20 Virtual Meeting, an annual food expo that provides thousands of consumers, food technology experts and businesses a forum to showcase new products and research on food ingredients, equipment, safety and security, sustainability, processing and packaging.

“I’m grateful that I was able to conduct meaningful research with McNeese faculty members, and then have the opportunity to present my findings to a professional audience. I’m honored to be a part of IFT20 conference,” Vuong says. “This was an eye-opening experience. IFT 2020 gave me the opportunity get insights on nutritional and technical aspects of food technology, and to see new technologies in product development.”