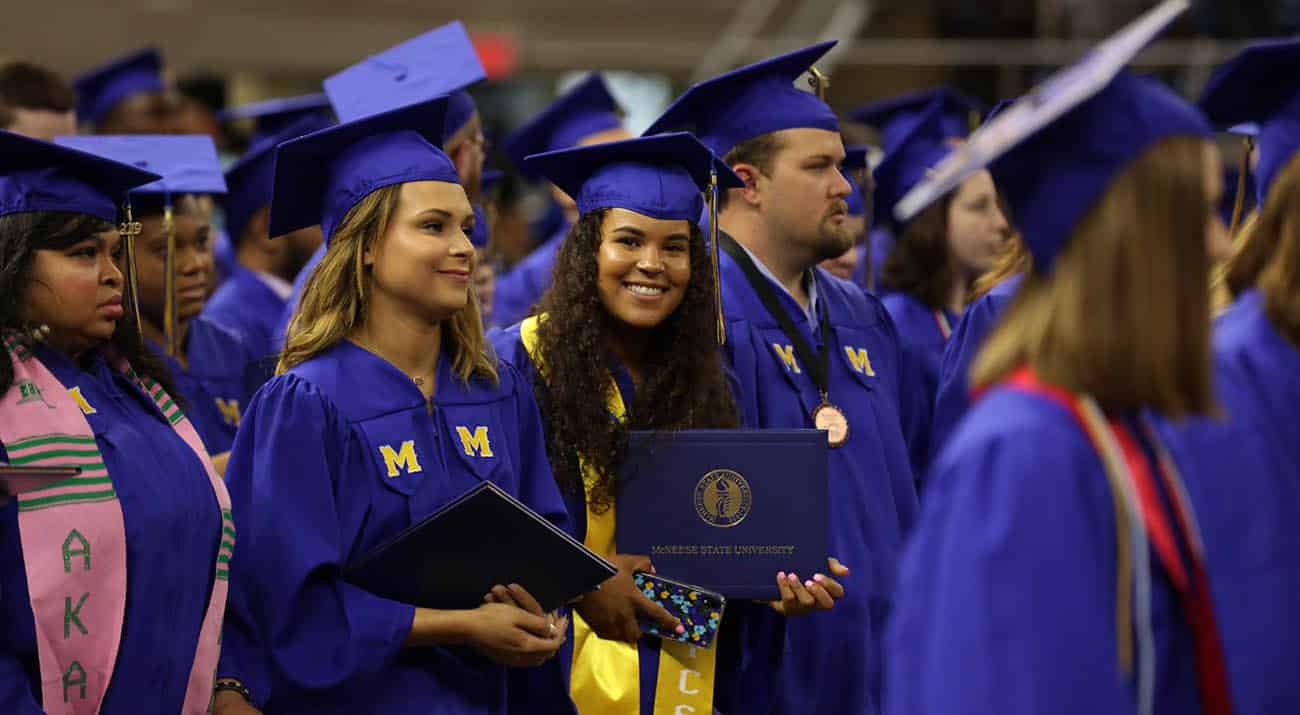 A new commencement tradition starts this Saturday (Dec. 14) for the fall Class of 2019 as McNeese State University hosts two ceremonies for the 153rd Commencement in the arena of its state-of-the-art Health and Human Performance Education Complex.

“In honor of the 80th anniversary of McNeese State University, commencement exercises return to an on-campus venue for the first time in 33 years,” says McNeese President Daryl V. Burckel. “With the completion of the new H&HP Complex, McNeese now has a venue capable of holding the commencement ceremonies. This on-campus setting will greatly enhance the experience for our graduates.”

Due to parking limitations around the H&HP Complex, guests should arrive early. Accessible parking is reserved near the main entrance. All parking is available on a first-come, first-served basis. Only guests traveling with their graduate will be allowed to park in the lot reserved for graduates. All bags brought into the arena are subject to search.

Commencement speaker for both ceremonies is McNeese alumnus and NBA great Joe Dumars. Dumars, who received his Bachelor of Science degree in management, is currently executive adviser to the NBA’s Sacramento Kings.

This National Basketball Hall of Fame member is recognized as one of the greatest point guards with the NBA’s Detroit Pistons, where he won two NBA championships in 1989 and 1990 and was voted the 1989 Finals MVP.

Perhaps the greatest player in McNeese basketball history and one of the best to play in the Southland Conference and the NCAA, Dumars is one of only three players in SLC history to be named to the first team all-SLC squad four times. He currently holds eight McNeese records, including the all-time scoring mark with 2,607 points, and he ended his career as the 11th leading scorer in NCAA history. He is a member of the McNeese Sports Hall of Fame and a recipient of the McNeese Distinguished Alumnus Award.

After retirement as a player, he served as the Pistons’ president of basketball operations, and under his leadership, the Pistons won six division titles, two conference championships and the 2004 NBA championship.

McNeese will also award an honorary Doctor of Humane Letters degree to state Sen. Dan W. “Blade” Morrish, who is a McNeese graduate with a Bachelor of Science degree in wildlife management.

Morrish is serving his third term representing District 25 in the Louisiana State Senate. He was first elected in 2008 and represents all of Jefferson Davis and Cameron parishes and portions of Acadia and  Calcasieu parishes. Prior to serving in the Senate, the Jennings native served three terms in the Louisiana House of Representatives from 1996 to 2007, representing District 37, which covered Jefferson Davis and Calcasieu parishes.

The McNeese commencement ceremony will be live streamed at www.facebook.com/McNeeseStateU for family members and friends unable to attend commencement. The ceremony will also be broadcast on the Calcasieu Government Channel at a date to be announced.

More information about the commencement ceremonies and parking can be found at www.mcneese.edu/guest-information.