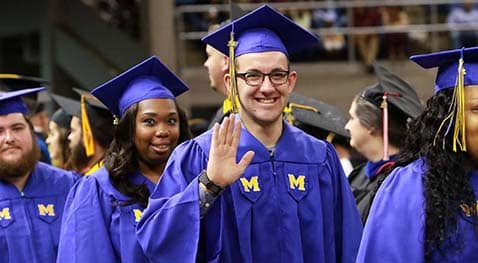 McNeese State University will hold its 152nd commencement ceremony at 10 a.m. Saturday, May 11, at Burton Coliseum.

McNeese President Dr. Daryl V. Burckel will welcome the spring candidates and introduce the Golden Scholars from the Class of 1969.

Commencement speaker is State Sen. Dan W. “Blade” Morrish (R), who is a 1972 graduate of McNeese with a Bachelor of Science degree in wildlife management. Morrish is serving his third term representing District 25 in the Louisiana State Senate, which includes all of Jefferson Davis and Cameron parishes and portions of Acadia and  Calcasieu parishes.

The Jennings native was elected to the Louisiana State Senate in 2008 and re-elected without opposition in 2012 and 2016. Prior to serving in the Senate, Morrish served three terms in the Louisiana House of Representatives from 1996 to 2007.

Morrish is the current chairman of the Senate Education Committee and the Select Committee on Hurricane Recovery and is a member of several other senate committees, including the Coastal Restoration Flood Control Committee, and a member of the Governor’s Advisory Commission on Coastal Protection, Restoration and Conservation. He was recently recognized for his outstanding conservation efforts by the Louisiana Wildlife Federation at the 55th Annual Governor’s State Conservation Achievement Awards program.

Brad A. Guillory, president of the McNeese Alumni Association, will address the students on behalf of the association.

For the spring commencement, each candidate received eight tickets for the ceremony. All guests must have a ticket to enter the coliseum.

The McNeese commencement ceremony will be live streamed at www.facebook.com/McNeeseStateU for family members and friends unable to attend commencement. The ceremony will also be broadcast on the Calcasieu Government Channel at a date to be announced.