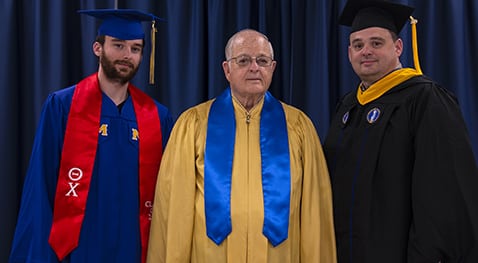 Three generations of the McRight family walked to “Pomp and Circumstance” at McNeese State University’s 2019 Spring commencement today (May 11).

Retired Maj. Kelly McRight – Class of 1962 – walked with fellow members of the Golden Scholars Society as the Class of 1969 was recognized on its 50th anniversary,  while his son, Jason McRight, graduated with a master’s degree in criminal justice, and his grandson, Blake McRight, received his bachelor’s degree in chemical engineering.

Kelly graduated from McNeese with a bachelor’s degree in agriculture and business. “When I attended McNeese, there were only the science and administration buildings, the auditorium, gymnasium and the dorm,” he says.

Kelly says he had a great experience at McNeese. “My degree opened a lot of doors for me. After I graduated, I worked extensively in the agricultural field before joining the U.S. Army and retiring after 29 years of service.” He also returned to his alma mater to teach ROTC from 1989-1993.

Jason, who also has a bachelor’s degree in criminal justice from McNeese (1997) is currently the director for planning and research at the Calcasieu Parish Sheriff’s Office. Although he says he has a short time before retirement, Jason decided to return to McNeese for his master’s degree.

“This was a personal goal of mine. I chose McNeese because it’s local, affordable and because the degree is 100% online. This makes it very easy for someone who’s working full time to take classes. That flexibility was an important factor.”

Blake says that both his grandfather’s and father’s experiences at McNeese influenced his decision to attend.

“McNeese’s chemical engineering program provides the same quality of education as programs at larger universities and it’s so close to home. McNeese was the clear choice for me.”