McNeese’s School of Rock to pay tribute to Elvis 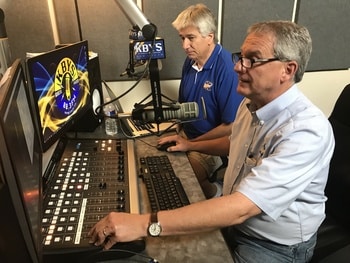 Aug. 16 marks the 40th anniversary of the death of Elvis Presley, the legendary “King of Rock ‘n’ Roll,” and McNeese State University’s weekly radio show – the School of Rock on KBYS 88.3 FM – will pay tribute to the King.

The show, hosted by McNeese’s Dr. Ray Miles, history professor and director of the Doré School of Graduate Studies, and Dr. Jeff Lemke, professor of music, will air “The King Is Gone But He’s Not Forgotten!” at its regular time at 11 a.m. on Saturday, Aug. 12, as well as a special time at noon on Wednesday, Aug. 16.

Dr. Jeff Lemke, in back, and Dr. Ray Miles host McNeese State University’s weekly radio show – the School of Rock on KBYS 88.3 FM.
The show will be paying tribute to Elvis Presley on the 40th anniversary of his death on Aug. 16.

The show will feature many of Presley’s greatest hits and a couple of surprises.

“So be sure to join us for the special edition of School of Rock as we commemorate the 40 years since Elvis ‘left the building’,” says Miles.

Fans can also go to www.kbys.fm for this broadcast and other scheduled KBYS programming.