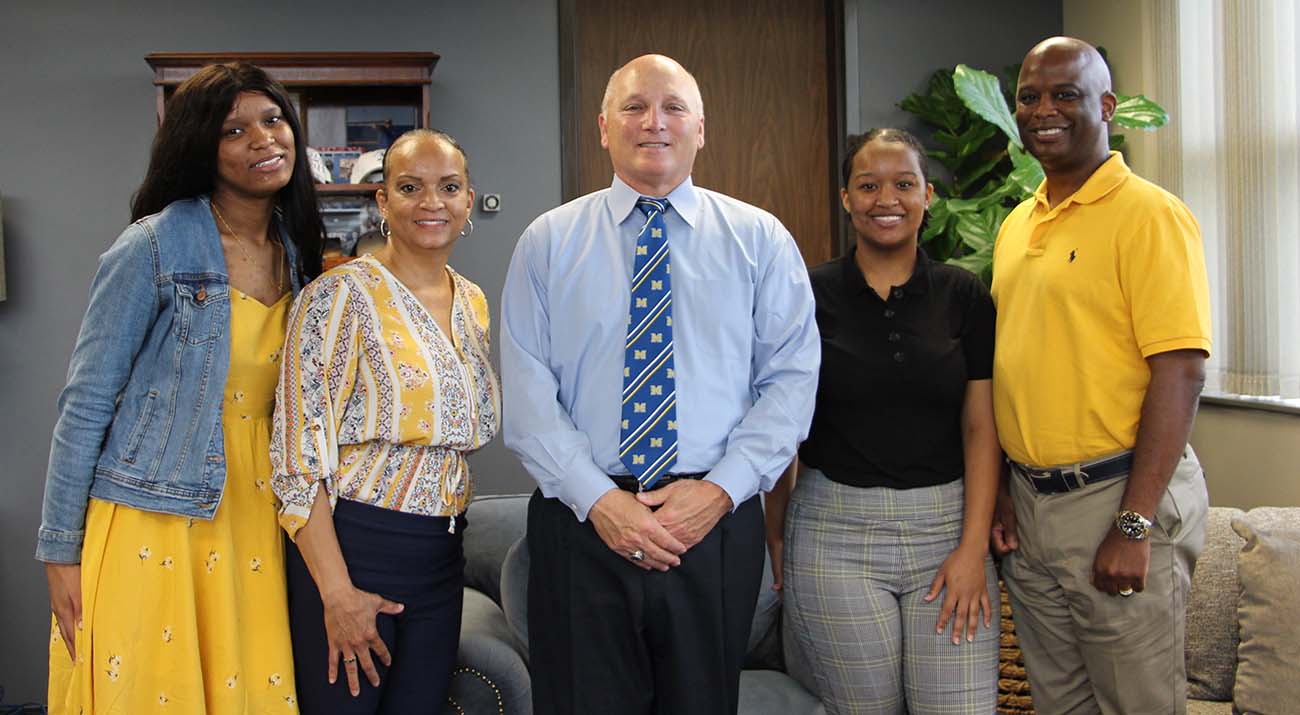 U.S. Army Col. Mark Ned (far right) and his wife Hilda (second from left) are ecstatic to have the family’s legacy at McNeese continue through their daughter Lori who is a freshman this fall. (L to R) Leza Ned, Hilda Ned, McNeese president Dr. Daryl Burckel, Lori Ned and Col. Mark Ned.

U.S. Army Col. Mark Ned, a 1994 criminal justice graduate of McNeese State University, and his wife, Hilda, are proud parents as their daughter, Lori, continues the family’s legacy as a fall 2020 freshman at McNeese.

This week, the family, including the Ned’s other daughter, Leza, traveled from South Carolina to Lake Charles to move Lori into a residence hall for the beginning of classes.

“We are thrilled that Lori made McNeese her First Choice and know that she will receive an excellent education and will be more than prepared for any career.”

Ned also pointed out with pride that his wife is currently working on a business degree offered online at McNeese.

“Hilda started her degree at McNeese before I was commissioned and stationed at Fort Polk. When she decided to finish her degree online, she didn’t give a second thought to returning to McNeese,” says Ned.

He credits the success of his Army career with the education and mentorship he received attending McNeese.

Ned completed his three years of active service at Fort Polk before entering corporate America. He returned to the Army again in 2002.

“I was first stationed in Nashville, Tenn., where I focused on recruiting,” he says. “I later was sent to St. Louis, Mo., where I entered the human resources sector of the military as a personnel integrations officer and secretary of the general staff.”

In this role he was the lead staff officer in administration, correspondence and protocol for all staff. Ned has also served as chief for the Army Strength Management Division for the U.S. Army Southern Command and senior human resource officer and assistant chief of staff for various command posts.

He is currently stationed at Fort Jackson in South Carolina where he is deputy commander for the U.S. Army Soldier Sustainment Institute.

Throughout his career, Ned says he has been able to apply what he learned at McNeese. “McNeese made me a competitive applicant for my master’s degree program and as a recent Army War College graduate,” he says. “Education is a lifelong process and McNeese gave me the foundation I needed to learn and excel in my career. I know McNeese will continue to provide excellent opportunities for my family as well.”