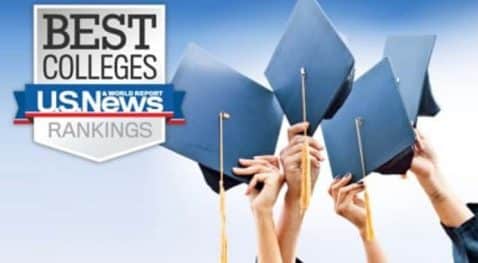 For the seventh consecutive year, McNeese State University has received national recognition as one of the best regional universities and one of the top public universities by U.S. News and World Report, widely considered to be the foremost authority on college rankings.

In the just released 2018 edition of “Best Colleges” McNeese is ranked in Tier One in the Best Regional Universities-South category and it is also ranked in the top 50 public schools in the southern region for a seventh consecutive year.

“Achieving national ranking is rewarding, but sustaining it for seven consecutive years is an extraordinary accomplishment and validates the tireless dedication and commitment of our faculty,” Dr. Daryl Burckel, McNeese president, said.Most recently, the 2017 College ROI Report by PayScale Inc. ranked the McNeese College of Engineering and Computer Science third among all engineering schools in the nation in terms of career return on investment – topping all engineering programs in the state of Louisiana.

McNeese’s 2016 nursing graduates exceeded the national average passage rate on the National Council Licensure Examination for Registered Nurses (NCLEX-RN), which is required by the National Council of State Boards of Nursing.  The McNeese students’ 97.2 percent first-time passage rate is 10 points higher that the national rate of 84.7 percent and well above the state rate of 89.16 percent. McNeese nursing students scored higher than every other program in the state with the exception of one that graduates nearly 50 percent fewer graduates. There are nearly 700 nursing majors this fall.

For a second consecutive year, Dr. Amber Hale, a molecular biologist and assistant professor at McNeese, was selected as one of 31 educators and scientists nationwide to participate at sea during the 2017 Nautilus Exploration Program expedition sponsored by the Ocean Exploration Trust.

Burckel said, “McNeese State University continues to receive national attention for its outstanding academic programs, faculty accomplishments and the success of our students because our people are McNeese’s biggest strength. The university is an inanimate structure, but the people within the institution give it life, project an attitude of success, convey our values, provide our students an excellent education and provide that ‘Excellence with a Personal Touch’ that McNeese is known for.”

The U.S. News ranking system considers information collected from several sources and measures indicators of quality including the range of academic offerings, the strength of the faculty, retention and graduation rates, as well as cost, availability of financial aid and campus life opportunities.

Regional universities provide a full range of undergraduate majors and master’s programs and selected public and private universities are ranked geographically in one of four regions-North, South, Midwest and West. The annual report is used as a tool by parents and students to help narrow their college search.

To see the full Best Colleges 2018 rankings by the U.S. News and World Report, visit http://www.usnews.com/education and follow the links.