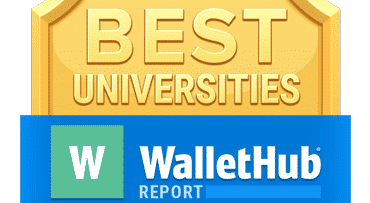 Wallethub, a personal finance website, compared more than 1,000 higher education institutions and ranked McNeese in the top half of the country and third in the state behind Tulane University and University of New Orleans.

According to the study, McNeese earned above-average markings for its net cost and graduation rate. Its post-median salary received average ratings when analyzing the salaries of former students who received federal financial aid, at 10 years after entering the school, Gonzales said.

Wallethub does not consult with individual colleges or universities to gather its findings but uses “reputable sources such as the National Center for Education Statistics, the Council for Community and Economic Research and the Department of Education,” Gonzales said.

When data is not publicly available it reaches out to institutions to confirm data points, she said.

Of the 15 schools analyzed in Louisiana there were “no specific trends” regarding the state’s higher education institutions compared with the rest of the U.S. However, Gonzales said, the three highest ranking in the state had common traits including the availability of employment services for students, study abroad programs, NCAA membership, placement services for graduates, weekend/evening programs, campus housing and a high return on educational investment.

Nov. 1 and 15 are generally regarded as early college decision deadline dates, Gonzales said. With rising tuition rates, she said the company hopes its research will help “families and future students decide on the best college or university for their needs.”