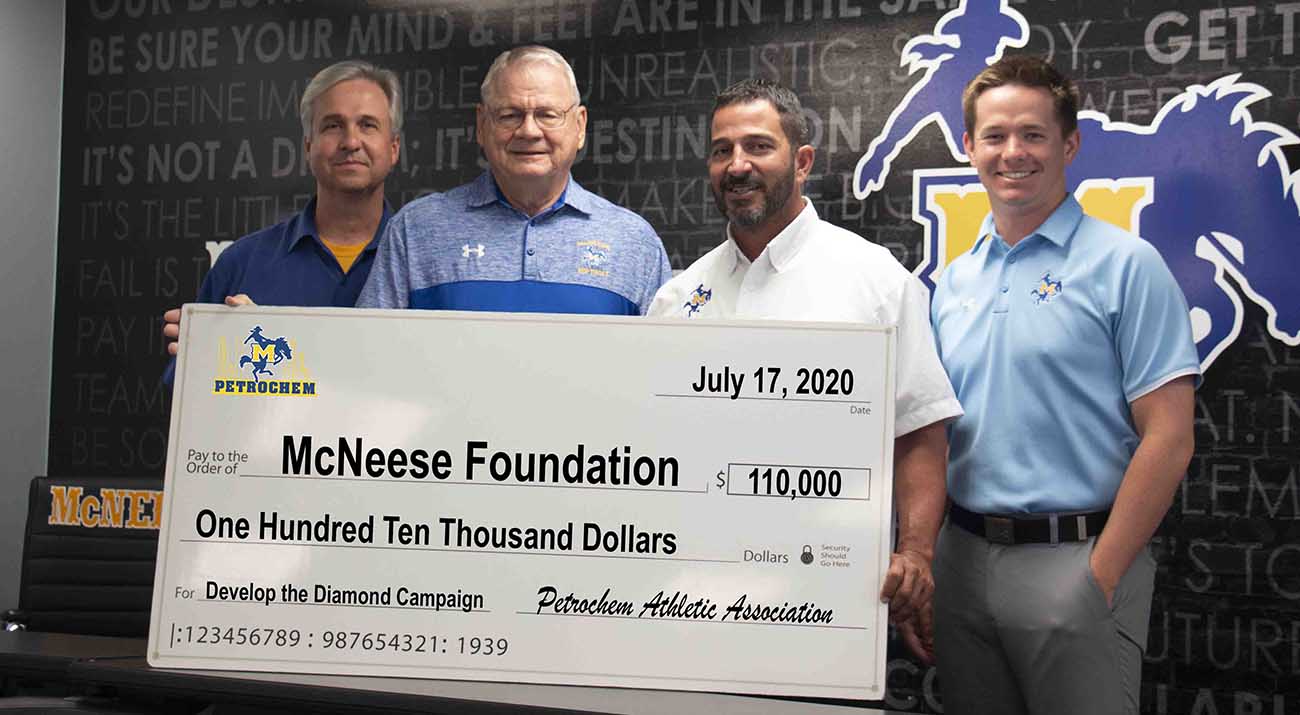 The Petrochem Athletic Association has pledged $110,000 over three years to the Develop the Diamond Campaign for the McNeese State University softball program. Supporters of McNeese softball have launched the campaign that will make numerous improvements to the softball facility.

“Our student-athletes contribute a tremendous amount of time, effort and commitment to McNeese both on the field and in the classroom,” Landreneau said. “Our responsibility is to continuously work to improve our student-athlete experience and our fan experience. These improvements and enhancements will do that and it will enhance our recruiting efforts.”

According to Dr. Wade Rousse, vice president for university advancement and dean of the college of business, funding for the nearly $1 million project will come from private donors and fundraising. “In addition, the softball program is selling 200 new covered, chair back seats behind home plate for a three-year commitment of $500 per seat,” he said. A nameplate identifying the donors will be placed on the seat backs.

“Coach Landreneau is doing a great job with developing a nationally ranked team and we are building a softball park that will be one of the best in the Southland Conference and among the finest in the country,” Rousse said. “Combined with our institutional focus on being a student-centric university, McNeese will be the first choice of the top high school softball players in the nation.”

Landreneau led the Cowgirls to the 2017 conference regular season and tournament championship, the 2018 SLC tournament title, the 2017 and 2018 NCAA postseason tournament and the 2019 regional finals. The team’s quest for a third straight conference title, and the fourth in five years, was cut short by the COVID-19 pandemic. Since taking the reigns as head coach in 2016, Landreneau has coached 17 all-conference, seven all-Louisiana, four all-region and three all-American student-athletes. He received a three-year contract extension after the 2019 season.

To join the Develop the Diamond Campaign or for more information, contact Kason Kimbrell, assistant athletics director for development and fundraising, at 337-475-5472 or kkimbrell@mcneese.edu.