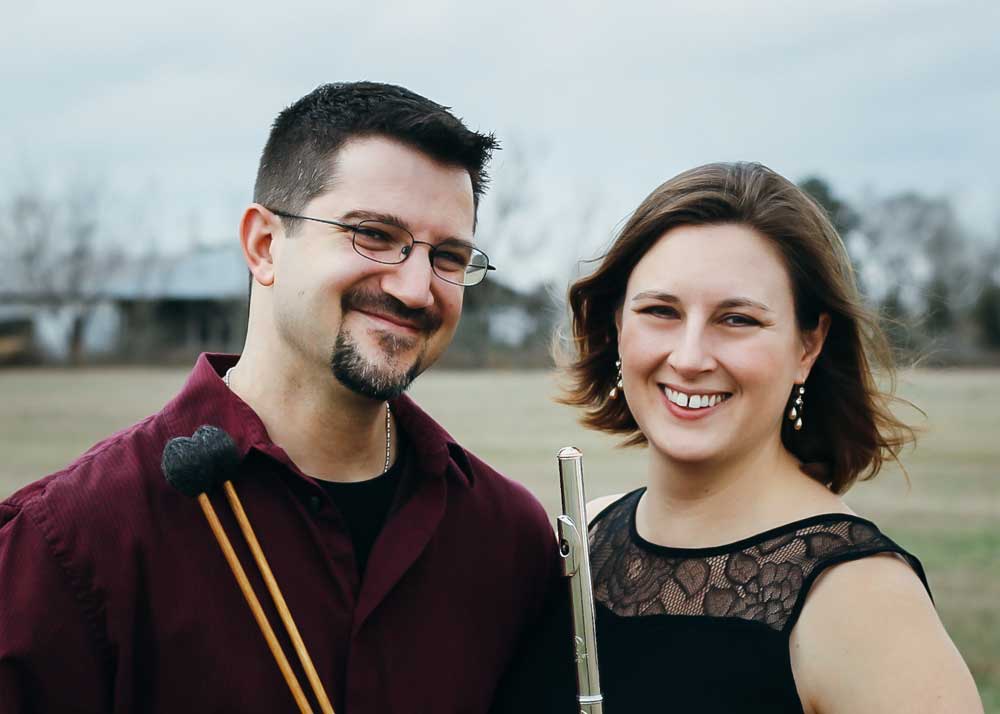 Dr. Brian Nozny, assistant professor of percussion at McNeese State University, and his wife, Rachel, a professional flutist, brought music back into their community when they put on a special live concert at the end of their driveway for their neighborhood.

Performing together as the BNR Duo since 2016, the two were scheduled to perform a recital just days after McNeese classes went online and all upcoming events were canceled on campus due to the threat of the Coronavirus. The Noznys found themselves, instead of performing, trying to fit an array of musical instruments into their house so Brian could continue teaching his classes from home.

“We couldn’t fit the vibraphone in at first, so we had to switch our bedroom with what was my office. Now, we have a shared office where we practice and I do my work,” Rachel says.

This obstacle, however, revealed an opportunity to bring some levity to their neighborhood during the stay-at-home order.

“The people who used to live at our house put up a basketball hoop that the neighborhood kids use all the time. Under normal circumstances, it’s not outlandish to have five or six kids who aren’t ours outside our house playing basketball. I was thinking these parents must be going crazy right now with their kids being home, so I thought, could we do anything?” Brian says.

Together, the pair revisited their recital repertoire and put together a live concert, which included works commissioned by the duo, pieces by Chick Corea and traditional Irish songs.

The couple played for about 45 minutes, and Brian says that around 25 people from the neighborhood showed up to watch, either setting up camping chairs six feet from other attendees or watching from their lawns and porches.

“Music – or any art for that matter – allows our mind and spirit to break away from our immediate reality and find relief in the most difficult of times. Hopefully it brought a little escape from the difficult isolation many of us are facing right now,” he says.

Brian received his Bachelor of Arts degree in music from Virginia Tech, his Master of Music in composition from the University of Miami and his Doctor of Musical Arts from the University of Kentucky. He has performed as a percussionist with the Mobile, Knoxville, Irving and Bismarck-Mandan symphonies and currently serves as principal timpanist with Sinfonia Gulf Coast. He has collaborated with groups such as the Bravura Percussion Trio, the Copper Street Brass Quintet and the Brickhouse Jazz Combo and is a also a member of JP3 (The John Psathas Percussion Project). He has performed at multiple Percussive Arts Society International Conventions and the National Flute Association Annual Convention.