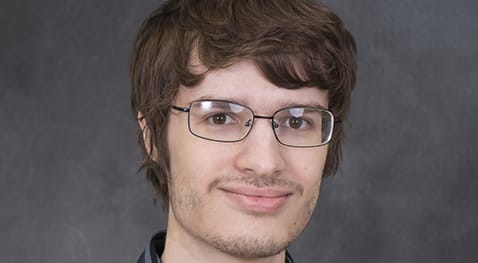 The IBM Vault challenge required participants to use their problem-solving skills, perseverance and technical knowledge to unlock six puzzles by translating data, decoding cyphers, uncovering hidden images and files, modifying a database and meeting deadlines for solving each puzzle. Participants were ranked by cumulative scores determined by the time it took to solve each puzzle.

“If a puzzle wasn’t solved before the deadline, the participant was eliminated,” according to Casteel, who heard about the competition from a friend from one of the Alternate Reality Game (ARG) communities he’s apart of.

“I didn’t know what to expect – I did it for fun,” he says. “Some puzzles took me around 20 minutes, whereas others took hours. Because they’re abstract puzzles, sometimes the clues could be hard to crack. Other times I made mistakes. For the second puzzle, I got what looked like a phone number, but I thought, ‘That can’t be it. Too easy.’ I didn’t end up calling that number until hours later.”

Casteel, from Sulphur, was among the top 75 competitors awarded an all-expense trip to IBM’s Innovation Center in Cambridge, Mass., to attend presentations and demonstrations on some of the latest technology research currently being developed at IBM, including state-of-the-art medical databases, Artificial Intelligence security and advanced tracking applications.

“IBM also hosted a day of computer-science activities for us, including a steganography challenge, which involves finding data hidden in images and text, an Escape the Room puzzle and a pentesting simulation game, where participants were tasked with hacking into an artificial mainframe to find its security flaws,” he says.

Casteel credits his classes and professors at McNeese for preparing him for the IBM competition and experiencing this once-in-a-lifetime event. “The opportunity to experience what IBM has to offer, plus encounter new areas of information technology, was invaluable,” he says.