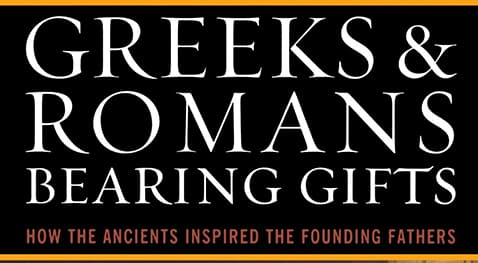 Author
Carl Richard will present a lecture titled, “Greeks and Romans Bearing Gifts:
How the Ancients Inspired the Founding Fathers,” at 3 p.m., Monday, Feb. 25, in
the McNeese State University SEED Center as part of the Spring 2019 SAGE
Series.

The Founding Fathers’ classical
education was the bedrock that inspired them to undertake the American
Revolution and influenced their approach to shaping of the new republic. Based
on his 2008 book of the same title, Richard’s presentation will explore what
the founders learned from their favorite stories from Greek and Roman
literature: the importance of individual rights from the absence of those
rights in Sparta, the perils of democracy from the instability of Athens and
the preciousness of liberty from its destruction by the Roman emperors.

He will also discuss how the
founders applied these lessons to their own heroic quest to win American
independence and establish a durable republic and how these lessons remain
invaluable for every citizen concerned with America’s future.

Richard
is a professor of history at the University of Louisiana at Lafayette. He received
his doctorate in History from Vanderbilt University and is the author of
“Twelve Greeks and Romans Who Changed the World” (2003), “The Battle for the
American Mind: A Brief History of a Nation’s Thought” (2004), “The Golden Age
of the Classics in America: Greece, Rome, and the Antebellum United States”
(2009), “Why We’re All Romans: The Roman Contribution to the Western World”
(2010) and “The Founders and the Bible” (2016).

Lectures
are open to the public and cost is $65 for the series. For more information or
to register, call 337-475-5616 or visit www.mcneese.edu/leisure.