A group of 127 members of the McNeese State University Pride of McNeese Marching Band and Cowgirl Kickers will be flying out of Houston on Dec. 28 to take part in the 2018 London New Year’s Day Parade and Festival.

Large instruments have been packed up and sent ahead of the event and the band will gather together for one more practice Dec. 27 before catching their flights the next day. The McNeese band will be in London through Jan. 4. 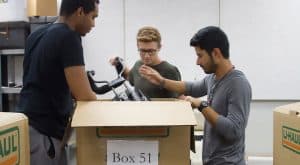 McNeese State University’s Pride of McNeese Marching Band will participate in the 2018 London New Year’s Day Parade and Festival. Band members (from left) Austin Young, of Jennings, Ty Ellender, of Lake Charles, and Joseluis Botello-Esquivel, of Pasadena, Texas, pack up some of the large instruments to be shipped to London ahead of the parade.

Excitement is in the air, according to Dr. Jay Jacobs, director of bands at McNeese.

“This is a tremendous educational opportunity for our students to travel abroad and see London,” said Jacobs. “This is a great honor to represent McNeese State University, the city of Lake Charles, the state of Louisiana and the United States on an international level.”

Jacobs said the support of the community, businesses, donors and corporate sponsor Lake Charles Toyota has been tremendous.

“The estimated cost for each student was $3,350,” said Jacobs. “Our goal was to raise enough to help defray each student’s expenses by $1,000. I’m happy to say that we met this goal thanks to the generosity of so many.”

For the parade’s finale performance, the Pride of McNeese will have two minutes to perform a new piece – an arrangement of “Joli Blon” and “Dancing Queen” – before the audience in the grandstands. And on Dec. 30, the band will perform in an outdoor concert that will include various pieces from this season’s halftime shows at Trafalgar Square.

“The finale performance area has very specific dimensions, so we had to work on changing block formations during practices, but we’ll be ready for the parade and concert,” he said.

The official invitation to this prestigious event came more than a year ago when former Lord Mayor of the City of Westminster and Senior Parade Patron Catherine Longworth – who was representing Queen Elizabeth II – traveled to the McNeese campus in person to present the official invitation.

Participation in the London New Year’s Day Parade and Festival is by invitation only. This year, 16 American bands were invited and McNeese is one of only two university marching bands participating.

This historic parade route includes Piccadilly Circus, Regent Street, Trafalgar Square and Whitehall with a final arena adjacent to the Palace of Westminster, Big Ben and Westminster Abbey. Over 650,000 spectators will line the parade route and over 350 million people will view the TV broadcast worldwide.