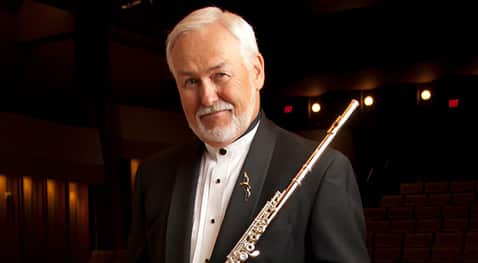 The McNeese State University W.A. and Dorothy Hanna Performing
Arts Department will present a program featuring internationally known flutist,
teacher, jazz and film musician Jim Walker on Monday, April 15. This program – open free to the
public – will include a master class from 9 a.m.-noon and a recital at 7 p.m., both
in Tritico Theatre.

A native of Greenville, Kentucky, Walker
is a graduate of the University of Louisville School of Music and he went
on to play in the U.S. Military Academy Band at West Point.

He was associate flutist for the
Pittsburgh Symphony and the principal flutist for Los Angeles Philharmonic for
several years and is the founder of the jazz quartet, Free Flight, which has
appeared on The Tonight Show and at the Hollywood Bowl and the Lincoln Center.

As a studio flutist for over 20
years, Walker can be heard on over 600 sound
tracks for jazz/pop sessions, television and motion pictures. He has also
collaborated with such composers and musicians as John Williams, Paul McCartney,
Wayne Shorter, Leonard Bernstein, James Galway and the LA Guitar Quartet.

Currently, he serves as a professor
of practice, winds and percussion and coordinator of flute studies at the
University of Southern California Thornton School of Music and as a professor
of flute and chamber music at the Colburn Conservatory of Music, both in Los
Angeles.