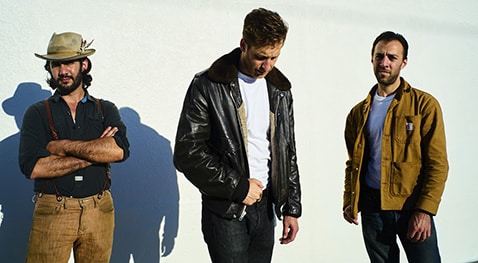 The acoustic trio – The Americans – is coming to the stage for a very special performance showcasing highlights of early American roots music at 7 p.m. Monday, April 15, in F.G. Bulber Auditorium as part of the 2019 Banners at McNeese State University cultural season.

This lecture/performance hybrid will treat the audience to an evening of stunning acoustics along with presentation pieces on the pre-war recording era featuring instrumentation like the fiddle, banjo, mandolin, guitar and harmonica from members Patrick Ferris, Zac Sokolow and Jake Faulkner.

The Americans appear throughout the excellent PBS show “American Epic,” a four-hour primetime documentary series exploring the first recordings of roots music in the United States during the 1920s, as well as its cultural, social and technological impact on the world.

Burnett, widely known for his role in curating the “O Brother, Where Art Thou” soundtrack, called The Americans, “Genius 21st century musicians that are reinventing heritage music for this century.”

In their primary incarnation as a full rock ‘n’ roll band with deep roots in shared traditional music, The Americans have twice joined Grammy and Oscar winner Ryan Bingham on national tours and backed up artists like Nick Cave, Tim Robbins and Lucinda Williams. The Americans even played the first dance at Reese Witherspoon’s wedding.

Tickets are $20 for adults, $5 for students under 18 and free for McNeese and Sowela students with current IDs.

Banners is supported by ticket sales, memberships, corporate sponsors and grants. For more information about the program or tickets, visit the Banners website at www.banners.org or call the Banners office at 337-475-5997.