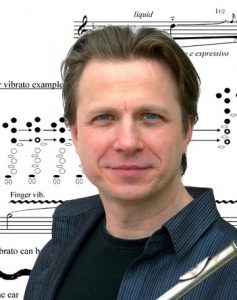 The McNeese State University W.A. and Dorothy Hanna Department of Performing Arts will present British flutist and composer Ian Clarke in a free concert at 7 p.m. Monday, April 16, in Tritico Theatre. Clarke will be accompanied by McNeese faculty members Lina Morita on piano and Judy Hand on flute.

His program will consist of his original compositions, which include “Maya” for two flutes and piano, “Hatching Aliens,” “Touching the Ether” and “Sunday Morning” for flute and piano, “Zoom Tube” for solo flute and “Within” accompanied by the McNeese Flute Choir and McNeese flute alumni.

Clarke is acknowledged as one of the leading players and composers in the flute world. His acclaimed CD, “Within,” has been one the world’s best sellers of flute music and his album, “Deep Blue,” reached the top 10 in the United Kingdom Classical Artist Chart, which is thought to be a first for an album of original flute music.

He is currently professor of flute at the Guildhall School of Music and Drama in London, England, and senior fellow of the Higher Education Academy.

Clarke has performed as a featured guest soloist and teacher at major conventions and events in Brazil, Canada, Iceland, Japan, many European countries and numerous times for the British Flute Society and for the National Flute Association in the United States.