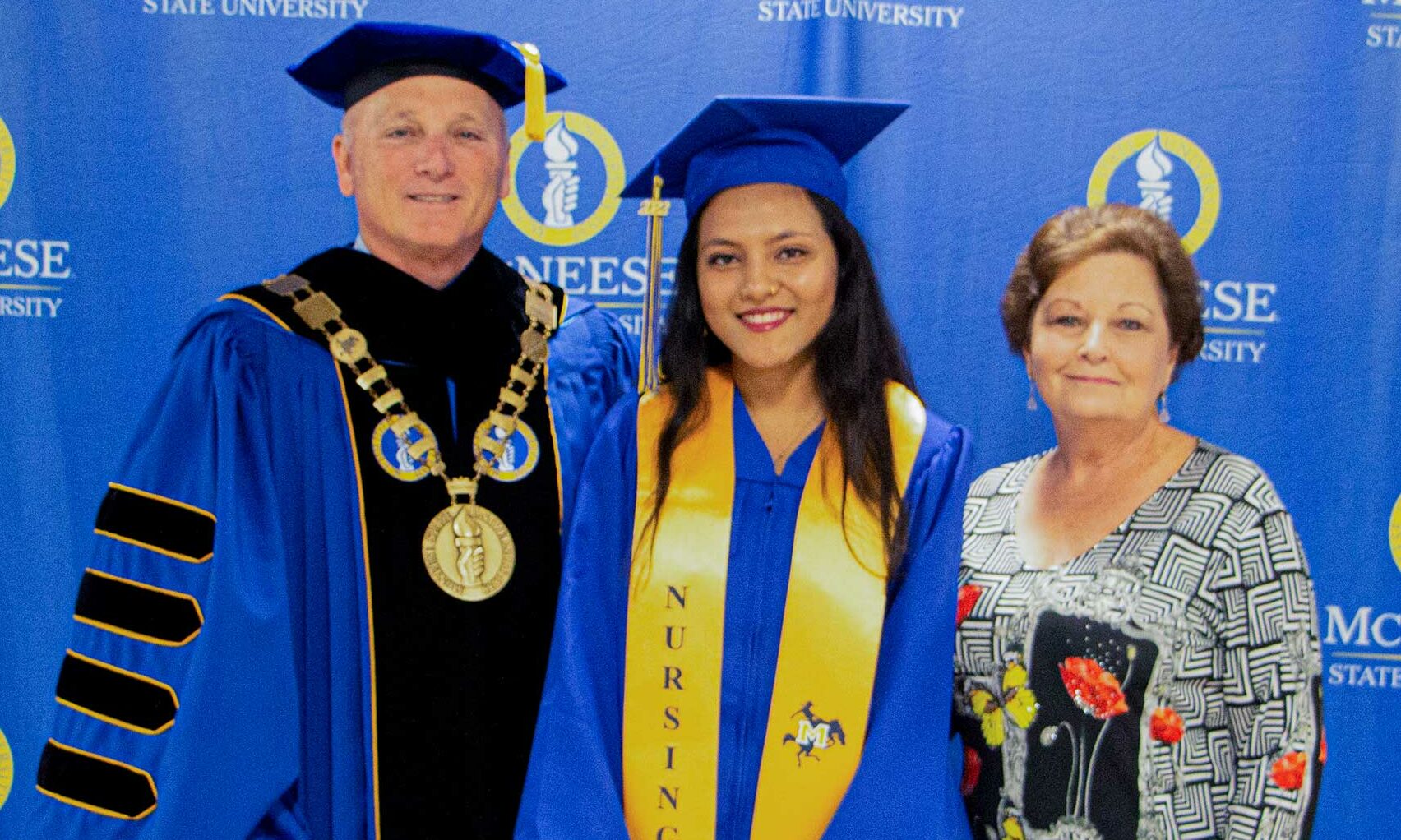 When Hurricanes Laura and Delta struck Lake Charles in 2020, they left a trail of destruction and devastation that the Lake Area community is still working to overcome. In the aftermath, members of the community stepped up and opened their wallets, their hearts and their homes to those who had lost everything. These were the circumstances that brought together international student and nursing major Manita Khatri and local resident Sarita Fahrmann. But the friendship that the two forged have kept them together ever since.

Khatri, from Khaireni, Nepal, originally came to the U.S. to pursue a degree in computer science but decided that the health care field was a better fit. Then living in Boston, though, she found the cost of pursuing a nursing degree prohibitively expensive.

“A lot of my high school friends from Nepal are pursuing their bachelor’s degrees at McNeese and a couple of them are in nursing. So, I talked to them and they told me that the nursing program at McNeese is a really good program. That’s how I ended up here,” she says.

Like thousands of other students, Khatri found her progress towards her degree abruptly interrupted by Hurricane Laura. Khatri, who had never experienced a natural disaster – “I hadn’t even heard of hurricanes when I was in Boston!” – says she evacuated to a friend’s house in Texas. Like many Lake Charles residents, she returned to find that she had lost almost everything.

“My friends and I were living in a townhouse near McNeese, and when we got back, it was not livable. The roof was leaking and the floor was almost about to collapse. Everything had been damaged by water. My room was destroyed,” she says. “We saved what we could but most of our stuff we had to leave or throw away.”

Khatri returned to Texas while McNeese was closed in the month following the hurricane. While classes resumed online for her friends, Khatri was informed that she would have to return to complete her nursing clinicals, which she would not be able to do unless she had a residence in Lake Charles.

“But I couldn’t find a place to live,” she says. “A lot of places were either still damaged or they were being renovated. There were no apartments available. But without finishing my clinicals, I wouldn’t be able to get my degree. It was a really difficult situation.”

The faculty and staff in McNeese’s Department of Undergraduate Nursing, realizing the situation that many students were in, began coordinating to find students housing – sometimes even in their own homes. Dr. Ann Warner, interim dean of the College of Nursing and Health Professions, took in two senior international students who were facing a similar situation.

Fahrmann, Warner’s longtime neighbor, learned about the situation facing students from a chance encounter with Warner’s husband Paul. Despite damage to her own home caused by the hurricane, she felt compelled to help.

“I’ve been living alone since my husband passed away and my son, his wife and daughter had moved out. So, I said, ‘I have a room and I could put someone there.’” Fahrmann says. “My family’s always been that way. We were always trying to help somebody if they needed it.

“Poor Manita arrives and had been from pillar to post,” she adds. “She was worried about paying me for staying here and I said, ‘What are you going to cost me, Manita? The water is a flat rate and you’ll use a little bit of electricity, that’s all.’ It wasn’t a big deal to me.”

Khatri says her first semester back in Lake Charles was spent trying to make up for the time lost to the hurricane studying for exams and clinicals and she spent most of the time in her room.

“Ms. Sarita was so kind,” she says. “She was always checking up on me and asking how I was doing. I had only lived with my friends before so she really tried to help me feel comfortable and at home.”

Once Khatri had caught up with her schoolwork, she and Fahrmann started to spend more time together, with Khatri cooking traditional Nepalese cuisine for Fahrmann, and Fahrmann introducing Khatri to the rest of her family.

“She had to cut down a little bit on the spices for me, but the food is very good,” says Fahrmann. “And my family loves her to death. My 8-year-old granddaughter, Caroline, adores her. It doesn’t matter what she’s doing with me, when Manita comes in the room, she drops me like a hot potato!”

What started as an act of charity became a friendship. Even though Lake Charles has slowly recovered since the hurricanes and there’s more housing available, Khatri has continued to live with Fahrmann ever since she first moved in.

“At first it was kind of awkward, but when I would come back from clinicals or work, we would just sit in her living room and talk about our day,” Khatri says. “The hurricanes were really devastating, and she helped me in a lot of ways. She not only gave me a place to stay but also someone to talk to. We really are like family now.”

“Her family has thanked me over and over. Her sister sent me some of their traditional clothing from Nepal as a thank you. They’re very nice people,” Fahrmann says. “But this has been great for me, too. I’ve just really enjoyed having Manita here and her companionship.”

On Friday, May 13, Khatri graduated with her bachelor’s degree from McNeese. Unfortunately, due to VISA processing delays caused by COVID, Khatri’s parents and siblings were unable to make it to the U.S. to celebrate with her. Khatri says she’s grateful that Fahrmann was there to see her receive her nursing pin and walk across the stage to receive her degree.

“We’ve both been emotional about me graduating,” Khatri says. “I’m so glad I had a member of my family who was there.”

While Khatri prepares to move out of her longtime and unexpected home and pursue her career after graduation, both say that they will continue to keep in touch.

“For Paul to just happen to tell me about these students needing a place to stay – I felt like God sent him to tell me that for a reason,” Fahrmann says. “I’m just so glad it worked out. It’s been a wonderful experience.”