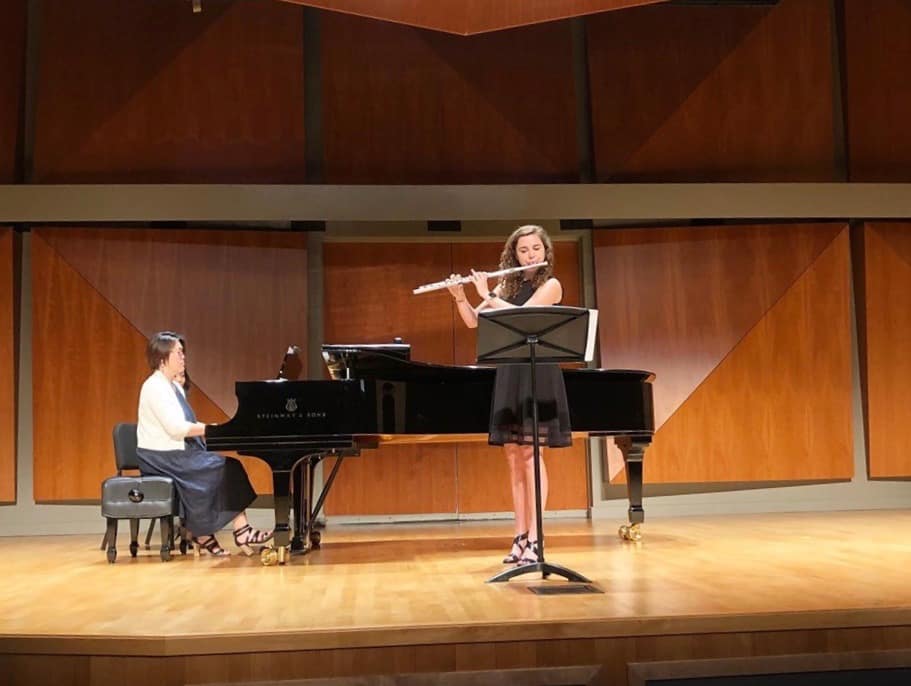 Merritt Jones performs in Los Angeles at "Beyond the Masterclass."

Walker, known for his versatility in classical and jazz styles and for his master teaching, is on the faculty at the University of Southern California and the Colburn School of Music in Los Angeles. He visited the McNeese campus last April as a resident of the Henry Alexander Endowed Professorship, where Jones was one of five flute majors to perform for him in Tritico Theatre. Based on her performance, Jones was invited to attend the masterclass, held July 21-27 in Los Angeles.

“Jim Walker is an amazing teacher and performer and students from all over the world submit video recordings to audition for his prestigious masterclass. It is quite an accomplishment for Merritt to have been selected as a result of her performance at McNeese,” says associate professor of music Judy Hand.

At BTMC, Jones attended private lessons under Walker and other classes in flute-related skills such as improvisation, piccolo techniques, ethnic flutes and tips on how to be successful in a performing career as a flutist. She also had the opportunity to study under other professional flute artists and perform as a soloist and with other flutists.

“I was thrilled to have the opportunity to work with internationally acclaimed pianist Mitsuko Uchida and with some of the most prestigious orchestras in the world,” says Jones. “I learned so much and met great people. This experience helped me gauge my ability on a global scale.”

Attendees also traveled to the Hollywood Bowl for a concert by the Los Angeles Philharmonic Orchestra, in which Walker was formerly principal flutist.

“From the beginning of their studies, I encourage all flute majors to attend off-campus conferences, workshops and masterclasses and to enter as many competitions as they can,” says Hand. “As a music performance major, Merritt is training to work as a performing artist or college professor, or both, and her experiences in Los Angeles will open doors to prepare her for the competitive world of orchestral and collegiate flute careers.”