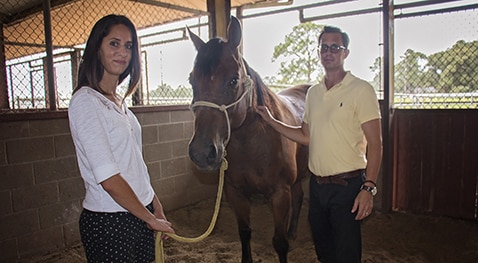 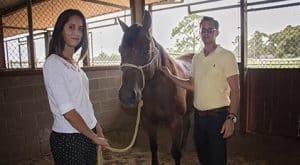 Sari Bosnyak, left, a Nottingham Trent University graduate student from the United Kingdom, is working on her thesis with Dr. Edward Ferguson, professor of animal sciences and an internationally known equine researcher. She is the first international intern for the Harold and Pearl Dripps School of Agricultural Sciences at McNeese State University.

Equine research being conducted in the Harold and Pearl Dripps School of Agricultural Sciences at McNeese State University has attracted the school’s first international intern.

Sari Bosnyak, a Nottingham Trent University graduate student from the United Kingdom, is working on her thesis with Dr. Edward Ferguson, professor of animal sciences and an internationally known equine researcher.

Her two-month summer internship is coming to an end and she will return to Nottingham to finish up her thesis and receive her degree in September.

When Bosnyak was researching topics for her graduate thesis, she discovered Ferguson’s published research in the international Journal of Equine Veterinary Science on the use of aromatherapy to treat stressed horses and how this could benefit the equine industry.

According to Ferguson, his research is cited in several international textbooks – he just happened to have a French textbook with the citation nearby, and his study is well-known throughout equine circles in Europe. His study was even cited by one of Bosnyak’s professors in a class this spring. This piqued her interest so she contacted Ferguson.

Since publishing the aromatherapy research, Ferguson has turned his attention to another equine research project – performance of quarter horses at race tracks.

He has been conducting research – with the help of undergraduate and graduate students armed with checklists – on the performance of race horses during racing seasons at Delta Downs in Vinton for the past five years on almost 4,000 quarter horses, and according to Ferguson, “this will be the largest race horse study done in real time.”

“My hope is to provide research that can help horse owners, trainers and track veterinarians, as well others in the horse racing industry, better evaluate horse behavior that can help identify horses at risk or are not ready to perform,” he said.

So, when Bosnyak reached out to him about doing her thesis on aromatherapy, he convinced her to work with him on race horses instead. She was awarded a scholarship by her university for her McNeese internship, which she began in June.

The United States was not foreign to Bosnyak – she received her undergraduate degree from a university in Iowa and has completed an equine internship in Texas.