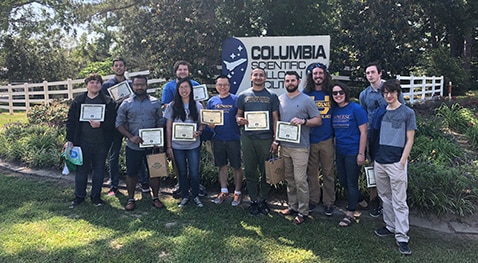 The balloon project is designed to give students a hands-on experience with an aerospace project and is funded through NASA’s National Space Grant College and Fellowship program at Louisiana State University.

“The modules were then placed in a payload and attached to helium-filled latex balloons, carried up to 100,000 feet to take atmospheric readings and then returned to the ground by parachute,” says Li. “All modules had to weigh 500 grams or less, yet they also had to be capable of withstanding the extreme conditions of the upper atmosphere and surviving the return trip.”

Team UFO, comprised of project manager Anthony Miller and team members Jason Rowland, Monica Nguyen and Caleb Thibodeaux, constructed its module to measure atmospheric temperature, pressure and humidity, which would then be compared to Dallas/Fort Worth National Oceanic and Atmospheric Administration data for accuracy.

Li says each of these projects presented unique challenges for the teams throughout the process, including the planning and building stages and last minute technical difficulties with the launches.

“But with perseverance and quick thinking,” Li says, “each team was able to overcome the challenges and all launches were successfully executed. Now, the teams will focus on studying the data their modules collected and then presenting their findings.”