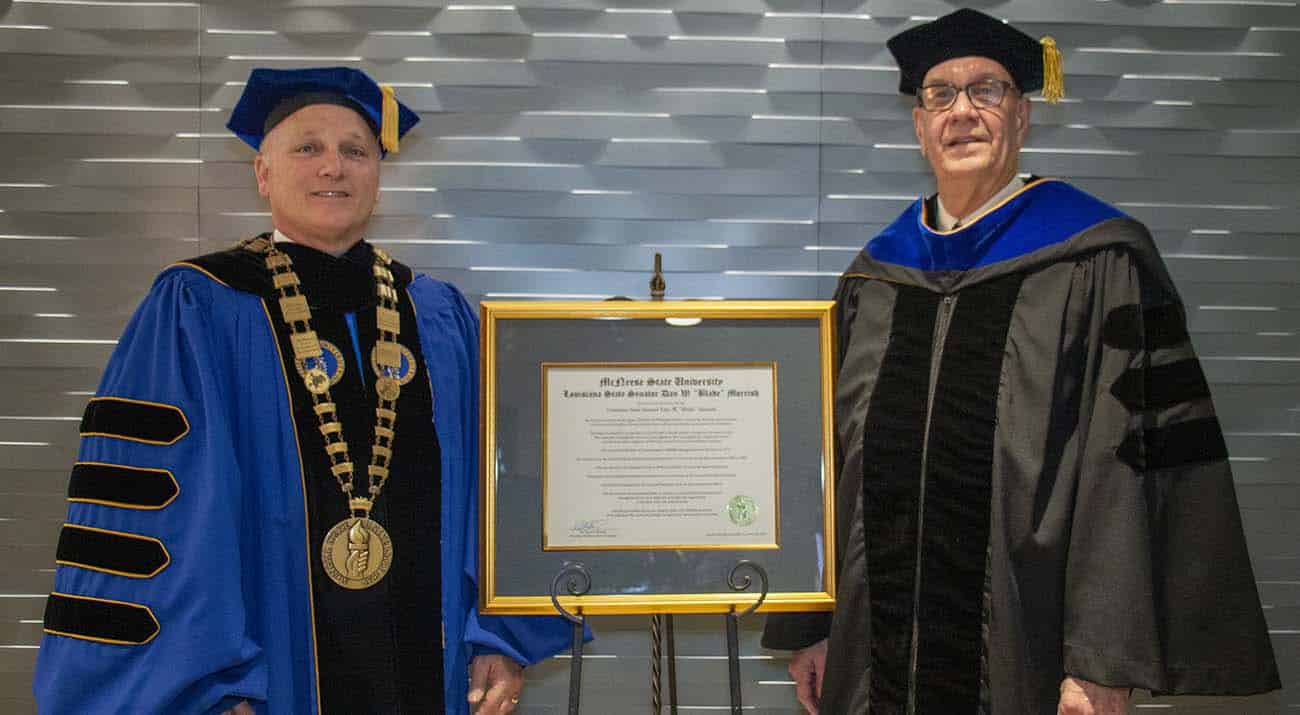 “This is the highest honor that the university can bestow upon an individual,” said Dr. Daryl V. Burckel, McNeese president. “Mr. Morrish’s substantial achievements, his passion for community service, along with his commitment to McNeese State University and Southwest Louisiana, clearly warrant the granting of the honorary doctorate.”

A native of Jennings, Morrish received his Bachelor of Science degree in wildlife management from McNeese in 1972. He is completing his third term representing District 25 in the state Senate, which includes all of Jefferson Davis and Cameron parishes and portions of Acadia and Calcasieu parishes.

Morrish was elected to the Senate in 2008 and re-elected without opposition in 2012 and 2016. Prior to serving in the Senate, Morrish served three terms in the Louisiana House of Representatives from 1996 to 2007, representing District 37, which covered Jefferson Davis and Calcasieu parishes.

In the Senate, he is chairman of the Education Committee and the Select Committee on Hurricane Recovery and a member and former six-year chairman of the Insurance Committee. He is also a member of the Environmental Quality Committee, the Coastal Restoration Flood Control Committee, the Governor’s Advisory Commission on Coastal Protection, Restoration and Conservation, the Legislative Rural Caucus, the Acadiana Delegation and the Board of Directors of the Professional Insurance Association of Louisiana and an interim member of the Finance Committee.

Morrish has served as an outstanding leader in civic and professional organizations through his service on a multitude of boards and organizations at the local, state and national levels. He is currently serving as president of the National Council of Insurance Legislators, an organization comprised of legislators from all 50 states devoted to addressing model insurance legislation that focuses on insurance issues throughout the country.

He is also past president of both the Greater Jennings Chamber of Commerce and the Jennings Merchants Credit Bureau, a member of the Jennings Rotary Club and involved with Our Lady of the Oaks Retreat House in Grand Coteau.

Morrish has also been recognized for his successful legislative work and outstanding conservation efforts by the Louisiana Wildlife Federation.