Share on FacebookShare on TwitterShare on LinkedInShare on Email
February 6, 2019 | McNeese Public Relations 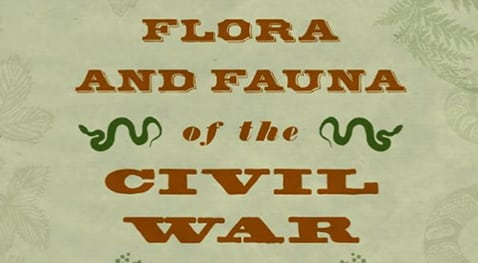 Author Kelby Ouchley will present a lecture titled “Flora and Fauna of the Civil War” at 3 p.m. Monday, Feb. 11, in the McNeese State University SEED Center as part of the Spring 2019 SAGE Series.

Based on his book by the same title, Ouchley’s presentation will explore the impact the Civil War had on American soil ­­­­- literally. As refugees and armies marched across the landscape, fleeing modern artillery and foraging for food, shelter and fuel, landscapes and habitats were devastated and animals displaced. At the same time, natural terrain formed barriers for armies and facilitated the spread of disease, while also providing medicine and raw materials necessary to implement the war.

This conflict with nature greatly influenced the day-to-day life of soldiers and civilians. Letters, journals and other first-person accounts provide glimpses of how individuals interacted with wild flora and fauna in a time of epic historical events and the reciprocal influence of plants and animals on the war effort.

Ouchley, a former biologist living in Rocky Branch, managed National Wildlife Refuges for the U.S. Fish and Wildlife Service for over 30 years. He received both his bachelor’s degree in wildlife biology and master’s degree in wildlife and fisheries science from Texas A&M University. He was central in the establishment of Black Bayou Lake National Wildlife Refuge and its development as a premier environmental education site, and for his conservation efforts, he recently received the National Wildlife Federation Governor’s Conservationist of the Year Award.

He is the author of “Flora and Fauna of the Civil War: An Environmental Reference Guide” (2010), “Bayou-Diversity: Nature and People in the Louisiana Bayou Country” (2011) and “American Alligator: Ancient Predator in the Modern World” (2013).

Lectures are open to the public and cost is $65 for the series. For more information or to register, call 337-475-5616 or visit www.mcneese.edu/leisure.