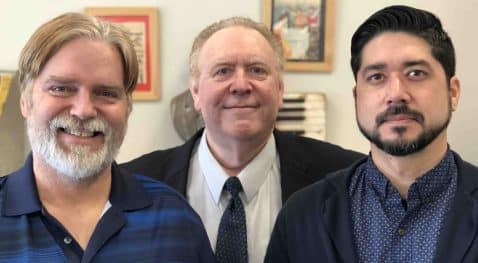 Lauderdale, assistant professor of French horn, joined McNeese in 1990. A California native, he earned his Doctorate in Musical Arts from North Texas University (now called the University of North Texas) and performs more than 30 orchestral concerts a year. He has played with the San Francisco Opera, San Francisco Ballet, Oakland Symposium, Fort Worth Symphony, the Dallas Chamber Orchestra and as principle horn for the Wichita Falls Symphony. He currently plays with the Acadiana, Rapides and Baton Rouge symphonies as well as the Symphony of Southeast Texas.

Loken, an instructor of piano and accompanist at McNeese, received his Doctorate of Musical Arts from the University of Oregon. He is a sought-after collaborative pianist who has performed in duo and chamber concerts across northern California and the Pacific Northwest and has worked with principal members of the Eugene Symphony, the Oregon Symphony, the San Francisco Opera Orchestra, the San Jose Opera and the Metropolitan Opera Orchestra. He has also performed at festivals and events including the Oregon Bach Festival, the Northwest Horn Symposium, the Marshanne Players Chamber Music Series, the Curious Flights Series and the Old First Concert Series.