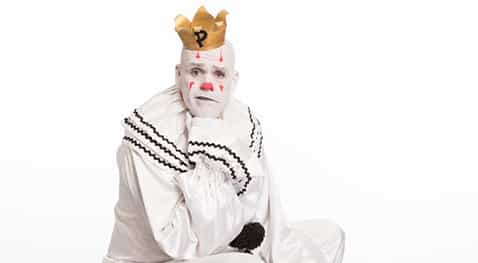 The
“Sad Clown with the Golden Voice” will bring to the Lake Area his heartfelt
emotional anthems and a suitcase full of Kleenex. Although it’s a Pity Party,
it’s not all sadness and longing. The show is peppered with a brilliant sense
of the absurd, mixing lots of humor with the awkward, tender moments.

Deemed
“Pagliacci by way of Pee-Wee Herman and David Lynch,” Puddles Pity Party has almost
500K YouTube subscribers and over 170 million views for indelible
interpretations of classics by ABBA, Bowie, Cheap Trick and Queen and his
unforgettable shmoosh-up of “Pinball Wizard/Folsom Prison Blues.”

He
has also collaborated with Postmodern Jukebox on several viral videos and
performed for more than 16 million TV viewers as a contestant on the semifinals
during Season 12 of “America’s Got Talent.”

Puddles
has toured extensively in the U.S. at legendary venues like the Regency
Ballroom in San Francisco, the Kennedy Center in D.C. and the Troubadour in Los
Angeles. He has also performed many times in the UK at Soho Theatre London and
the Edinburgh Fringe Festival, with additional worldwide festival appearances at
the Adelaide Fringe Festival, Perth Fringe World, Melbourne International
Comedy Fest, Just for Laughs Montreal, Belgium’s Gent Festival, Festival
Supreme (LA), Bumbershoot Festival (Seattle), Moontower Comedy Festival
(Austin), and Bethlehem’s MusikFest.

All tickets are $20. Banners is supported by ticket sales, memberships, corporate sponsors, and grants. For more information about the program or to get your tickets, visit the Banners website at www.banners.org or call the Banners office at 337-475-5997.