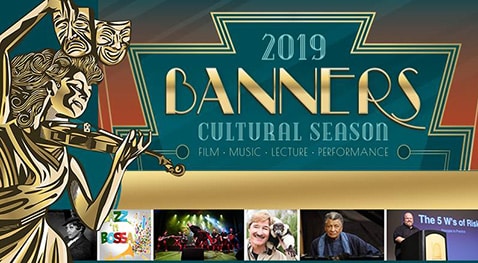 “Highlights include Scotland’s own Red
Hot Chilli Pipers, who have performed on huge stages such as the Olympics,
Peter Gros from the original ‘Mutual of Omaha’s Wild Kingdom’ and a
lecture/performance on the pre-war recording era by performers featured on ‘American
Epic,’ the primetime Emmy-nominated PBS special produced by Robert Redford,
Jack White and T-Bone Burnett,” said Hanemann.

“We are also deeply honored to host
South African Jazz Master Abdullah Ibrahim just nine days before he is to be
honored with the nation’s highest award for jazz musicianship at the John F. Kennedy Center for the Performing
Arts in
Washington, D.C.,” she added. “And rising star and bluegrass prodigy Billy
Strings joins us on opening weekend only a week after his first appearance on
the Grand Ole Opry.”

Hanemann said the Banners Cultural Season makes its 2019 entrance
with a members-only reception and performance at the historic F.G. Bulber
Auditorium on the McNeese campus with “Josephine.”

“On March 7, we invite
members to join us for
an on-stage celebration featuring incredible eats and a special meet-and-greet
with the performers from the season’s opening show, ‘Josephine,’ a burlesque
cabaret dream play,” says Hanemann.

Several membership options are available. A basic membership includes two tickets to all performances and is available for $150. An individual membership to all events is $80.

To see the various levels of membership available or ticket prices for some of the events, check out the Banners website at www.banners.org or call the Banners office at 337-475-5123.