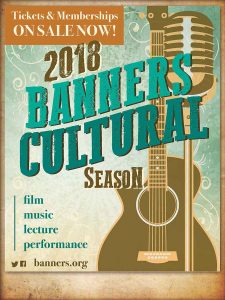 The 26th season of Banners at McNeese State University kicks off in March and this year’s entertainment includes everything from crowd-pleasing musical ensembles and breathtaking dance shows to captivating speakers and film screenings, according to Brook Hanemann, Banners director.

“Our season this year boasts a variety of educational and entertainment offerings designed to engage patrons of all ages and interests,” says Hanemann. “Our entertainment highlights everything from Gypsy jazz, Irish stepping, Russian folk dance and Grammy Award instrumentalists to Broadway musicians, retro/cutting edge country fusion and a multi-art, audience interactive collaboration of dance, music and real-time painting.

“And for those who want to expand their minds, our spectacular educational lineup includes lectures, films and engaging speaking events spanning subjects such as storm-chasing, National Geographic’s “Monster Fish,” Peter Gros’ animal wildlife conservation and what it is like to grow up as Castro’s secret daughter in Cuba,” she adds.

Hanemann says the season kickoff, “One Night in Memphis,” is a members-only event not to be missed this year.

“On March 2, at the Isle of Capri, we will be bringing back an era of unmatched showmanship as we relive the night Jerry Lee Lewis, Elvis, Johnny Cash and Carl Perkins took to the stage for a spontaneous jam session at the renowned Memphis Sun Studios. Those looking to kick back and relax can enjoy complimentary valet parking and ease in to a great seat to watch a show that is sure to please,” says Hanemann.

Several memberships are now available. A basic membership, which includes two tickets to all performances, is available for $150. A single ticket membership to all events is $80.

For more information about the season’s events, other levels of membership or individual ticket prices, check out the Banners website at www.banners.org or call the Banners office at 337-475-5123.

“One Night in Memphis”

The Banners Cultural Season opens with a reception and performance at the Isle of Capri Casino Hotel. Get ready for a night of rockabilly, country, gospel and pure 1950s rock ‘n’ roll with “One Night in Memphis” – a high energy concert that takes you back to Dec. 4, 1956, the night when four of the biggest names in early rock ‘n’ roll – Elvis Presley, Carl Perkins, Jerry Lee Lewis and Johnny Cash – gathered together for an impromptu jam session at the legendary Sun Studios in Memphis. Former cast members of the Broadway smash “Million Dollar Quartet” will perform at this opening event. 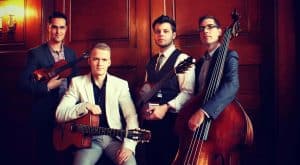 The acoustic jazz ensemble, Rhythm Future Quartet, has a straightforward agenda: to keep the spirit of Gypsy jazz alive and expanding in today’s musical universe. The virtuosic foursome, named for a Django Reinhardt tune, offers up a newly minted sound, influenced by the classic Hot Club of France, yet wholly contemporary. Led by violinist Jason Anick and guitarist Olli Soikkeli, the quartet performs dynamic and lyrical arrangements of both Gypsy jazz standards and original compositions that draw upon diverse international rhythms and musical idioms. With Max O’Rourke on second guitar and Greg Loughman on bass, Rhythm Future is dedicated to expanding the boundaries of a vital musical genre.

With an artist’s palette that mixes captivating vocals, intricate choreography and exciting audience interaction, Artrageous takes you on a unique visual journey packed with wild inspiration, creativity and fun. The Artrageous troupe of artists, musicians, singers and dancers pay tribute to a variety of art forms, pop icons and musical genres culminating in a gallery of fabulous finished paintings. The signature of the Artrageous Troup is interaction and engagement, so be prepared to be a part of the show.

The rise of country music legend Johnny Cash (Joaquin Phoenix) begins with his days as a boy growing up on the family farm, where he struggles under the scorn of his father (Robert Patrick). As the years pass, Cash ends up in Memphis, Tenn., with his wife, Vivian (Ginnifer Goodwin), and breaks into the music scene after finding his trademark sound. While on tour, Cash meets the love of his life, singer June Carter (Reese Witherspoon), but Cash’s volatile lifestyle threatens to keep them apart.

From the far reaches of St. Petersburg, Russia, and Tbilisi, Georgia, Moscow Nights and Golden Gates Dancers tour America performing masterpieces of Russian and Georgian folklore, song and dance. Contrasting elaborate lyrical suites against pulsating dances, these cultures come to life in a whirlwind of colorful costumes and exotic sounds. The dancers thrill audiences with their syncopated choreography, gymnastic leaping and explosive foot stomping. The singing includes well-known tunes such as “Kalinka,” as well as Cossack war dances and Siberian love chants. 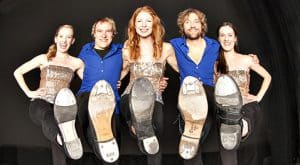 StepCrew is an unbelievable new show which brings together three styles of exhilarating dance forms – Ottawa Valley stepdance, Irish stepdance and tap. With virtuosic dancers and musicians from the likes of The Chieftains, Cherish the Ladies and Bowfire, this cast of outstanding talent takes you on a dance journey as champions in their respective art forms to show audiences the amazing similarities and differences among these three captivating styles. The StepCrew also boasts three world-class fiddlers backed by an amazing five-piece ensemble comprised of some of the most talented and respected musicians in the Celtic music scene today.

Alina Fernández, daughter of late Cuban leader Fidel Castro, will talk about her book about her life and her father. Long known for her harsh criticisms, she fled Cuba for Spain in 1993 using false documents and a disguise arranged by two friends abroad and joined the millions of Cubans in exile. She will share what it was like to grow up as the secret daughter of a leader who ruled with an iron fist.

Having intercepted over 1,000 tornadoes and a dozen powerful hurricanes since he started chasing 20 years ago, Reed Timmer is well-known as the most successful and extreme storm chaser in the world and is one of the few people in existence to document both an F5 tornado and the most devastating hurricane in U.S. history – Hurricane Katrina. His “hands-on” experience with a vast assortment of hazardous weather and natural disasters and his extensive education in the science of meteorology have made him one of the world’s most respected experts on severe weather forecasting, safety and survival.

Chronicling Syria’s descent into unbridled chaos and the rise of ISIS, this gripping and insightful work captures the Syrian War’s harrowing carnage, political and social consequences, and, most importantly, its human toll. Academy Award-nominated filmmaker and best-selling author Sebastian Junger and Emmy Award-winning producer Nick Quested untangle these complex issues to create an informative and compelling documentary, edited from almost 1,000 hours of footage. Personal stories of survival and tragedy follow an extended family in their attempts to flee Syria.

Freshwater ecologist and a National Geographic Society Fellow Zeb Hogan is dedicated to the research and protection of the world’s largest freshwater fish.  In 2006, Hogan began leading the Society’s “Megafishes Project,” representing the first worldwide attempt to document and protect the world’s largest freshwater fishes. Through this project, Hogan travels to the most endangered of these environments, striving to save critically endangered fish and the livelihood of people who share their habitats. Hogan documents his discoveries on the National Geographic WILD television series, “Monster Fish.”

Peter Gros: From the Original “Mutual of Omaha’s Wild Kingdom”

Peter Gros has nearly 30 years of field experience with wildlife. He is a frequent lecturer on conservation and preservation at universities, zoos, theaters and nature and science centers around the nation. His goal is to share his passion for the natural world with young people across the planet, inspiring them to protect animals both locally and globally.

The original “Mutual of Omaha’s Wild Kingdom” series – a program honored with 41 major awards, including four Emmy Awards and an endorsement by the National PTA for television programming recommended for family viewing – was one of the best known and longest-running series on nature and the animal world.

Open free to the public Super-cali-fragil-istic-expi-ali-docious! Winner of five Academy Awards, including Best Actress (Julie Andrews), Best Song (“Chim Chim Cher-ee”) and Best Visual Effects, “Mary Poppins” is a movie experience your family will enjoy. “Practically Perfect In Every Way,” Mary Poppins flies out of the windy London skies and into the home of two mischievous children. With the help of a carefree chimney sweep named Bert (Dick Van Dyke), the spirited nanny turns every chore into a game and every day into a “Jolly Holiday.” Share the music, the magic and the joy of “Mary Poppins” with Banners and you’ll be ready for the anticipated sequel this year.

Winner of 10 Grammy Awards and a protégé of the legendary jazz master Dizzy Gillespie, Arturo Sandoval was born in Artemisa, a small town in the outskirts of Havana, Cuba, on Nov. 6, 1949, just two years after Gillespie became the first musician to bring Latin influences into American jazz. Sandoval began studying classical trumpet at the age of 12 and today he has evolved into one of the world’s most acknowledged guardians of jazz trumpet and flugelhorn, as well as a renowned classical artist, pianist and composer. 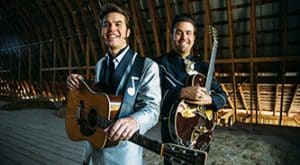 These guys don’t just sound retro…they are retro! As young boys, Christopher and Taylor Malpass soaked up the music of their granddad’s phonograph records. Christopher earned his first talent show trophy at age 7 and Taylor was playing mandolin by the time he was 10. Today, they promote the work and music of classic country artists they treasure while creating new music and making their own mark in the lineage of a rich American cultural heritage.

Open free to the public “The Eagle Huntress” follows the story of Aisholpan, a 13-year-old Kazakh girl from Mongolia, as she attempts to become the first female eagle hunter to compete in the eagle festival at Ulgii, Mongolia, and she has complete confidence that she will succeed, as she has never been taught otherwise. She belongs to a family of nomads who make their living herding goats and cattle across the vast Steppe. While there are many old Kazakh eagle hunters who reject the idea of any female taking part in their ancient tradition, her father believes a girl can do anything.