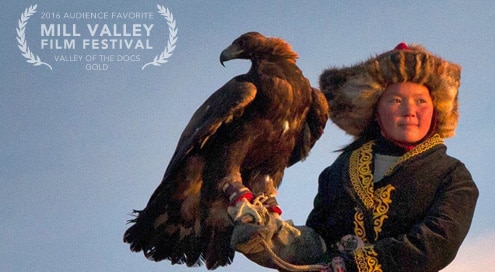 The 2018 Banners at McNeese State University season concludes with a free public screening of the documentary, “The Eagle Huntress,” at 3 p.m. Saturday, April 28, in Stokes Auditorium in McNeese’s Hardtner Hall.

The G-rated film follows the story of Aisholpan, a 13-year-old Kazakh girl from Mongolia, as she attempts to become the first female eagle hunter to compete in the eagle festival at Ulgii, Mongolia.

Although Aisholpan has confidence she will succeed, as she has never been taught otherwise, there are many older Kazakh eagle hunters who reject the idea of a girl taking part in their ancient tradition. Daisy Ridley, most famous for her role as “Rey” in the new Star Wars trilogy, is executive producer and narrator for the film.

The 2016 film was shortlisted for an Oscar nomination and nominated for a British Academy of Film and Television Arts Award for Best Documentary. It was also both a New York Times and a Los Angeles Times Critics Pick.

For more information about the program, visit the Banners website at www.banners.org or call the Banners office at 337-475-5123.